Note: This Event was part of my “Secret Experimental Event Series” for Big Weekend Calendars and The Austin Events Wall Calendar. You can read more about the event series in this post.

As I detailed in the post about the event series, I was trying to come up with really boring events. Chewing gum seemed to be the epitome of boredom, so I decided I should make a whole event out of it.

I also happened to have a bunch of fake moustaches lying around my house so thought I could use those as well.

I added the “y’all” to the end of the name so that it would sound friendlier.

Here’s the description of the event:

Anyone want some gum?

I got some gum I can share with y’all. Come on down and get a piece. I also have some fake moustaches if you feel self-conscious about your chewing and want to distract people from looking into your mouth so much.

I wanted to make sure that no one would think I was trying to pass off used gum on them so I made sure to point that out.

Some of the moustaches had been used but since I couldn’t figure out which ones, I decided to not mention whether they were used or not.

For the video I decided that since gum is often associated with the color pink, the video would use pink panther-esque music.

I chose Patterson Park again as my event location. It’s close to my house and has covered picnic tables and hardly anyone is ever there.

But first I went to HEB to get some gum and other supplies. When I got there, I found that the gum gods were smiling upon me: 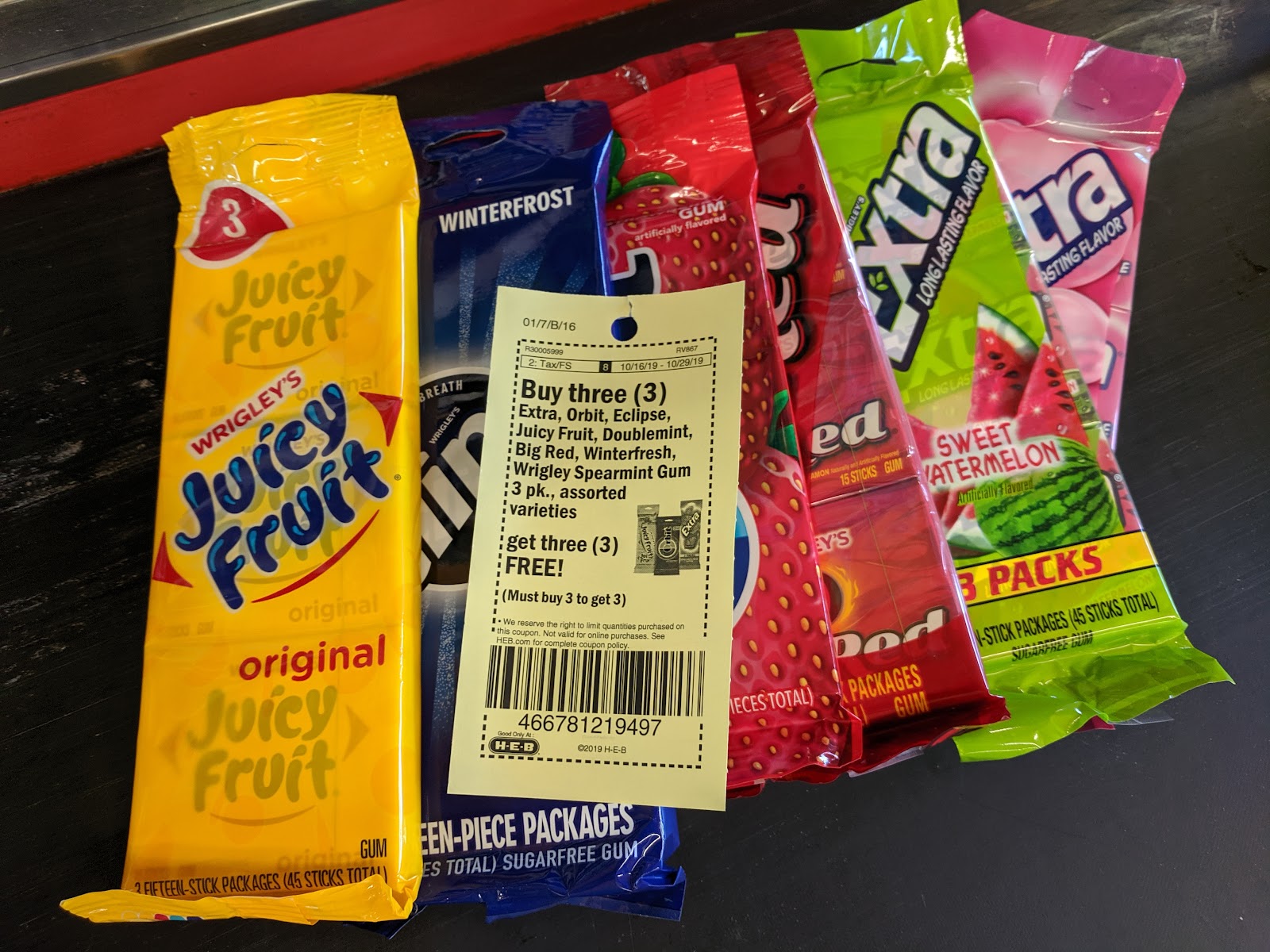 Buy 3 Get 3 FREE! WHAT? This was a promising sign.

I took my 6 packs of gum, some sparkling waters, my sandwich sign, tablecloth, tape, and all the other stuff that made these events a big hassle for me then went down to Patterson Park to set up.

Once I had it all laid out and ready it didn’t take long for no one to show up. Luckily it was windy so I was kept busy trying to keep all my business cards from flying away while keeping the tablecloth from flopping over and hiding my gigantic pile of free gum. Luckily I brought a lot of tape.

Then my friend Emily showed up. Awesome. It turns out she doesn’t like gum but was happy to take a sparkling water and a moustache.

Emily is the best at finding participants for my events.

On the other side of the playground there was a guy walking his dog and not chewing any gum. Emily shouted over to him about there being free gum. He came over because he couldn’t understand her from that far away. He also didn’t seem to understand her from close up but he was happy to take some gum. I wanted to totally blow his mind so I gave him like 3 individual packs of gum. Wow!

Despite being mostly clean-shaven he didn’t want any moustaches . Oh well.

Then a family came to the playground. Emily got them to take some gum as well. I gave the dad the entire multi-pack of eclipse gum. Holy shit I think it was like he had won the lottery. He didn’t look like he realized he had won the lottery but I’m sure it sunk in and blew his mind when he got home and saw how much gum he was going to be chewing.

Those were our only participants so I had a lot of gum left. Emily didn’t want it and I didn’t think it was a good idea to feed it to the grackles even though they looked pretty interested in it. So I took it home.

Do you know what? Juicy Fruit is really stinky. One stick smells good. A lot of packs does not smell so good. Maybe this is why HEB had it on sale. HEB doesn’t need that stuff stinking up their whole store. Anyhow, when I woke up the next day the juicy fruit had stunk up my whole house. Even though it was really strong smelling I still couldn’t tell what kind of fruit it was. They don’t tell you what kind of fruit it is. They only say that it’s juicy. Also, it’s only juicy for about 10 seconds of chewing.